Let me show it. 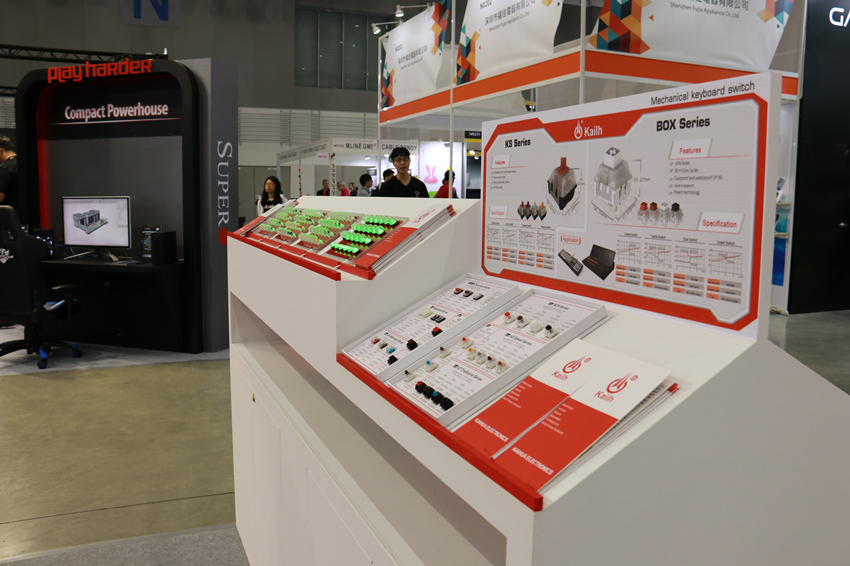 yep,there’s not any new key switch for display,but we made a aluminium alloy box to show kailh full series of keyboard switch,it’s very nice. do you think we’ll make a big deal?

And then it’s kailh sun switch updated version,yes,it features box switch stem ,when you press it more stable and which has advantage of waterproof and dust-proof function.The old version sun switch is still manufactured.

The new product is LED rotary encoder,it have 11.5mm inside dia and 16mm out diameter,you can press it and rotate it at same time and then it will be lighted,which was widely used on the keyboard volume button as well as auto car and some home appliances etc.

Maybe you will say it’s not special,yes,I admit;because of the key switch design has been met the choke point,this computex many keyboard manufacturers announced the magnetic switch.maybe ,they have found other way to research the mechanical switch,in the future,who knows what will be happened.but we know the keyboard switch market has been saturated,just like many key switch supplier will figure out to make kinds of colorful keyboard switch to appeal keyboard enthusiast,maybe in the end,you will find that the classic type switch is really essential.

So at this computex,we won’t keep eyes on the mechanical keyboard switch,we also develop other field switch,more info pls visit our website http://www.kailhswitch.com.